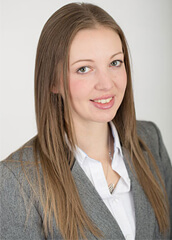 Professional expertise before joining the firm:

Sarah trained at a local firm and qualified into the family law department in February 2011. She subsequently moved to a large national firm as an assistant solicitor dealing with all aspects of family law.

When you joined the firm:

Department responsibilities (within the firm):

Solicitor within the family department

All aspects of family law

Committees or organisations (to support the claim of specialist legal expertise):

Member of the Association of Lawyers for Children

Notable cases: 2015 – Instructed by mother in respect of an Emergency Protection Order and Interim Care Order. Allegations made against the parents of physical harm, however throughout the course of the proceedings evidence was produced that the child did not understand the serious implications of the allegations that she was making and that these had been fabricated by the child due to her own difficulties. Child returned home to the mother with considerable support in place to assist her.

2015 – Instructed by mother in relation to care proceedings. Two previous sets of proceedings concerning different children resulting in adoption and placement with the family. Child removed at birth and psychologist instructed to complete an assessment showing the improvements that the mother had made between proceedings and her ability to recognise previous concerns of the Local Authority. A positive assessment of the mother was completed by the local authority and the child returned home.

2014 – Instructed bymother in relation to care proceedings as her child had been placed into foster care at birth. The matter was transferred to the High Court, as long term placement of the child was to be with the maternal aunt in Ireland and therefore the Court had to consider jurisdictional issues in the course of the proceedings.

2013 – Represented the applicant birth mother, following adoption proceedings. Allegations made against the adoptive parents of physical abuse and child ran away, locating her mother through her older siblings. Successfully argued that orders should be made in favour of the birth mother and child remained in the mother's care.

2013 – Represented the respondent father in Children Act Proceedings where the mother was extremely hostile towards contact and made numerous allegations against the father in an attempt to frustrate contact. Contact was re-instated and progressed to overnight unsupervised contact.

Favourite film: Too many to mention

Favourite book: Don’t really have one

Likes: Spending time with friends and family, nice meals out

Personal ambition: To become a member of the Children Panel

As a temporary measure to assist with the Covid-19 response, the Government has relaxed the rules around providing employers with medical evidence to support sickness absence. This is predominantly to ease the pressure on general practices as they deal with...
Read more

COVID-19 and the recovery of commercial rent arrears