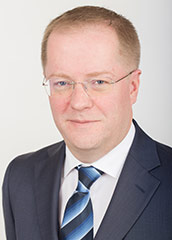 Where/when you studied: University of Birmingham 1987 to 1990

Professional expertise before joining the firm: None

Areas of special legal expertise: Health and Safety Prosecutions, principally for the Health and Safety Executive and the Office for Nuclear Regulation and for local authorities. He also provides training to inspectors and experts.

Prosecution at Preston Crown Court following the death of a worker caused by a failure to maintain the safety limit switch on an RCV and an unsafe system of work. Fines imposed of £750,000 and £160,000 respectively.

Prosecution of Tesco Stores and Tesco Maintenance following injuries sustained by a worker who fell through the roof of the Tesco Liscard Store. Fines totalling £500,000 imposed by Liverpool Crown Court.

Defendant convicted after trial at Liverpool Crown Court of breach of Section 2 in respect of failing to guard machinery properly. Defendant represented by specialist health and safety Queen's Counsel.

Prosecution at Manchester Minshull Street Crown Court under Section 2 following the death of an employee who had been crushed as a result of an unsafe system of work for the storage of materials.

Fine of £400,000 imposed by Manchester Crown Court for breach of Section 3 in relation to a failure by the Defendant to establish the weight bearing capacity of one of its roof voids which resulted in serious injuries sustained by a contractor.

Newton Hearing at Liverpool Crown Court. Successfully argued that the Defendant company’s breaches were a significant cause of death following an incident in which an employee had run down the length of a moving vehicle and had been crushed between that vehicle and another whilst attempting to dive into its cab to apply a handbrake. The court accepted that the victim's lack of recent training was more than a minimal contribution to the accident.

Prosecution following an employee gardener suffering severe hand injuries when his hand came into contact with a rotating fan on a ride on lawn mower. Defendant was represented by leading health and safety QC, who at trial sought to argue that the Defendant had done all that was reasonably practicable to avoid an accident. Substantial legal argument between advocates. Defendant convicted after trial and fined £140,000.

Prosecution at Liverpool Crown Court for breach of Section 3 following a fatal accident to a farm worker crushed by a falling concrete panel as it was being moved into position to form the wall of a cattle shed.

Prosecution of Defendant for breach of section 2 in exposing its stonemason employees to the risks associated with inhalation of respirable crystalline silica. Defendant fined £100,000 at Preston Crown Court.

Crown Court Trial involving breach of Workplace Transport Regulations, arising from an accident in which a worker had been hit by a reversing vehicle. Defendant company convicted and fined £85,000.

Prosecution at Liverpool Crown Court for breach of Section 2 relating to a fatal accident that occurred on the Defendant’s automated assembly line resulting in a fine of £150,000.

Defendant fined £66,000 at Preston Crown Court following incident in which employee sustained severe burns whilst working with flammable materials during the cleaning of an aviation fuel tank.

Successfully resisted Abuse of Process argument in relation to prosecution brought by HSE against private landlord in respect of failing to inspect fire appliance.

Successful defence of an Appeal against a Prohibition notice imposed upon Interserve by HSE in relation to fire risks present during the construction of an extension to a large Manchester hospital.

Prosecution brought following an investigation into 2 legionella related deaths that had occurred to patients at Broadgreen Hospital.

Represented HSE at Inquest into the death of an employee who had been driving a wagon containing steel sheeting when the sheeting had become displaced and had pushed through the cab of the vehicle, crushing the driver to death. Subsequent conduct of prosecution as solicitor.

Prosecution of the University at the Crown Court following serious injuries sustained by an employee injured by an unsafe vehicle barrier.

Prosecution of the local authority for 5 breaches of health and safety offences following an accident in which the driver of a ride on mower narrowly escaped serious injury when the vehicle overturned as he was driving the same on an incline.

Lead solicitor in this case which involved the prosecution of a client, principal contractor and sub-contractor for various health and safety breaches discovered during the investigation into the traffic management arrangements in relation to the re-surfacing of a major road leading into the City of Liverpool. Each Defendant in turn pleaded guilty 4 weeks into the trial with fines imposed of £25,000 against LCC, £100,000 against Enterprise Liverpool and £1.3 million against Tarmac Trading.

Fine of £100,000 imposed by Carlisle Crown Court for failures on the Defendant's part in relation to its management of the use of bedrails in its hospitals over a significant period of time.

Defendant fined £400,000 by Carlisle Crown Court for breaches of health and safety highlighted during an investigation into a fatal accident and the standards of care at one of its care homes.

Complex prosecution following investigations in relation to two separate fatalities involving vehicles being driven by the Defendant's employees. Guilty pleas to breaches of Sections 2 and 3 and a fine imposed in the sum of £120,000 by Carlisle Crown Court.

Prosecution for breach of Section 2 following accident in which an employee sustained severe injuries when an FLT vehicle collided with his own vehicle during loading and unloading operations. Defendant fined £120,000.

Prosecution for breach of Section 2 after employee killed when the FLT he was driving overturned during loading operations at the Defendant's premises. Defendant fined £140,000.

Instructed on behalf of the local authority to prosecute the organisers of a music festival following very serious injuries sustained by a sub-contractor who was electrocuted whilst moving a portacabin into place in preparation for the festival. Guilty plea to a breach of Section 3 obtained from the festival organisers.

Successful prosecution of designer of Tower Crane foundation and principal contractor in relation to the collapse of a tower crane at the Kings Dock Mill development in Liverpool. Fine of £280,000 imposed upon Principal Contractor.

Prosecution of a steeplejack company following the death of one of its employees. The scaffold upon which he was working from at the top of a chimney had collapsed and he had fallen a distance in excess of 150 feet.

Prosecution under Section 3 of the Health and Safety at Work Act 1974 following an accident in which a worker had been run over by a tipper truck sustaining injuries which effectively meant that he could not work again. Contested mode of trial in the lower court. Defendant company fined £185,000 at Crown Court.

Prosecution of defendant company following investigation into death of an employee. Fines of £140,000 imposed.

Prosecution following an incident in which a 4 year old child, whilst out on a trip with the local nursery had sustained serious abdominal injuries as a result of falling down a water inlet that was located in woods adjoining the local park.

Represented HSE at Inquest into the death of an employee who had been driving a wagon containing steel sheeting when the sheeting had become displaced and had pushed through the cab of the vehicle, crushing the driver to death. Subsequent conduct of prosecution as Solicitor.

Prosecution following the death of a delivery driver who had fallen from the curtain sided vehicle that he was loading. Fine of £120,000 imposed.

Sensitive case involving the death of a young girl who had drowned in an industrial pool the same having become an allurement to local children. Case resulted in fines totalling £200,000.

Instructed by HSE to initially assist alongside a CPS manslaughter investigation and then to take over the case following the CPS decision to refer back to HSE. The case resulted from an accident in which a recovery driver had been crushed to death whilst working underneath the body of a bus. Appears in Archbold 2009 at para 7-140 (see below).

Tragic case involving the death of a young boy whose clothing had become trapped in the mechanism of a roller shutter door of a car park owned and managed by Bruntwoods.

Where educated: The University of Birmingham

Personal ambition: Achievable : To climb every hill in England above 2,000 feet; Unachievable – to watch Preston North End in the Champions League.

Here are some Employment Law changes we can expect to see in 2021:   Non-exclusivity Clauses   On 4 December 2020, the Government began consultation into two specific areas of employment law, both of which are due to end on 26 February 2021....
Read more

There has never been a more important time to look out for oneself and those whom we hold dear. The daily news is enough for everyone to bunker down or escape. We are, sadly, stuck in an increasing mire of restrictions. The effect on the economy is massive...
Read more
More articles